Good evening to all. I hope everyone had a good week and are happy to finally see some rain coming our way. It sure was a long dry spell but it looks like that has ended. Maybe we will also see some snow later on. I know all the kids would enjoy that.

It’s hard to believe that Christmas Day is only three weeks away. Where does the time go? Speaking of Christmas I have included an article about the history of another carol. Many of our Christmas carols were written around the theme of peace on earth and “Hark The Herald Angels Sing” is no exception. I hope you enjoy the following article about that wonderful old song.

“Hark! the Herald Angels Sing”
by Charles Wesley
The United Methodist Hymnal, No. 240

The opening lines of this favorite Christmas hymn echo Luke 2:14, “Glory to God in the highest, and on earth peace. . .” (KJV). Immediately, the hymn writer established a cosmic connection between the heavenly chorus and our hope for peace on earth. While many Christmas carols recount in one way or another the Christmas narrative, Wesley provides a dense theological interpretation of the Incarnation.

Wesley begins not with the prophets, the Annunciation to Mary, the journey to Bethlehem or the search for a room, but in media res – in the middle of the action. Rather than citing the final phrase of Luke 2:14 – “good will toward men” (KJV) – he offers his theological interpretation – “God and sinners reconciled.” This is indeed a stronger theological statement. Note that lines 2, 3, and 4 of the opening stanza are placed in quotation marks, an indication that they are virtually citations from Scripture. Wesley includes his theological interpretation of the last poetic line within the quoted material indicating the strength and authority of his perspective. 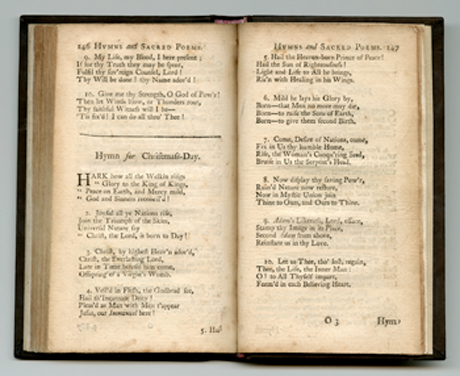 “God and sinners reconciled” was a natural interpretation since the hymn was written within a year of Charles Wesley’s conversion. It first was published under the title “Hymn for Christmas Day” in Hymns and Sacred Poems (1739) in ten shorter stanzas, each stanza half the length of the stanzas we sing today. The hymn that we now sing is the result of many alterations by numerous individuals and hymnal editorial committees.

Changes in hymn texts are quite common. The average singer on Sunday morning would be amazed (or perhaps chagrined) to realize how few hymns before the twentieth century in our hymnals appear exactly in their original form. Perhaps the most notable change in this hymn was Wesley’s first line. The original read, “Hark how all the welkin rings!” “Welkin” is an archaic English term referring to the sky or the firmament of the heavens, even the highest celestial sphere of the angels. This term certainly supported the common eighteenth-century notion of the three-tiered universe, where the top tier includes the celestial beings, the lowest tier the normal activities of humanity (birth, death, marriage, work, sickness) and the natural created order (rain, drought, natural disasters), and the middle tier where celestial beings influence the activities of beings and events on earth with their superhuman powers.

Gratefully, George Whitefield (1740-1770), a powerful preacher and friend to the Wesley brothers, made several changes to this hymn in his Collection (1753). He eschewed the original first line for the scriptural dialogue between heaven and earth. Wesley scholar and professor at Perkins School of Theology, Dr. Ted Campbell, comments on Whitefield’s modification of the first line with his characteristic humor: “I have wondered if anybody but Charles knew what a welkin was supposed to be. Maybe John looked at the draft version and said, ‘It’s ever so lovely, Charles, but whatever on earth is a ‘welkin’?’ So, all the more reason to give thanks for the editorial work of George Whitefield.”

The familiar first line we now sing sets up the opening stanza as an expansion of the song of the angels in Luke 2:14. Rather than exerting influence in the form of spirits, demons, or other beings said to inhabit the middle zone of the three-tiered universe, God, through the Incarnation, comes directly to earth in human form, the “Word made flesh . . . [dwelling] among us . . . full of grace and truth” (John 1:14, KJV). The change in the opening line is perhaps the most significant alteration of the many that have taken place in this hymn over the centuries. 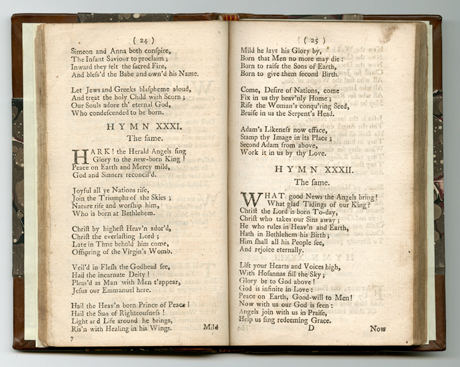 The second most significant change from the original is the addition of the refrain, reiterating the first phrase of Luke 2:14. This came about for musical reasons. Almost exactly 100 years after the hymn’s composition, Felix Mendelssohn (1809-1847) composed a cantata, Festgesang (1840), celebrating the 400th anniversary of the invention of moveable type by Johannes Gutenberg. A chorus from this cantata was adapted and paired with Wesley’s text in The Congregational Psalmist (1858) by an English musician and singer under Mendelssohn, William H. Cummings (1831-1915). A famous and influential hymn collection, Hymns Ancient and Modern (1861), carried this arrangement and helped to standardize its form and promote its broader use. Pairing the tune MENDELSSOHN with Wesley’s text caused two additional changes from the original. Two of Wesley’s short stanzas were combined into one to fit the longer tune; a refrain, repeating the first two lines of stanza one, was added to accommodate the tune. There is no doubt that most of the alterations to Wesley’s original text combined with Mendelssohn’s rousing tune have helped to make this one of the most festive and popular of all Christmas hymns.

The final four stanzas of Wesley’s original are usually omitted. This is understandable as they are theologically and biblically dense with allusion and, perhaps, not as poetic as the oft-quoted stanzas. Yet they give us insight into Wesley’s theology of the Incarnation:

Come, Desire of nations, come,
Fix in us Thy humble home;
Rise, the woman’s conqu’ring Seed,
Bruise in us the serpent’s head.

Now display Thy saving power,
Ruined nature now restore;
Now in mystic union join
Thine to ours, and ours to Thine.

Adam’s likeness, Lord, efface,
Stamp Thine image in its place:
Second Adam from above,
Reinstate us in Thy love.

Let us Thee, though lost, regain,
Thee, the Life, the inner man:
O, to all Thyself impart,
Formed in each believing heart

The allusions to Scripture and various Wesleyan theological concepts are many. A few must suffice. “Desire of nations” is a reference drawn from Haggai 2:7: “And I will shake all nations, and the desire of all nations shall come . . ..” Handel incorporated this passage into Messiah (1741) in a bass solo in the Christmas portion of the oratorio. John Mason Neale, translating the Latin hymn Veni, veni Emanuel in the middle nineteenth century, cited this reference into the final stanza of his hymn: “O come, Desire of nations, bind/in one the hearts of all mankind.”

Wesley often used the words, “mystic union,” a Moravian concept that he incorporated into Wesleyan theology in the second stanza cited above. In the third stanza above, we are reminded of imago Dei in the phrase, “Stamp Thine image in its place,” taking on the image of God in place of that of sinful Adam, a reference to the Wesleyan concept of sanctification.

“Hark! the herald angels sing” highlights the virgin birth, the universal application of the coming of “th’incarnate Deity” to all nations, and that Christ, who was “pleased with us in flesh to dwell,” gives humanity a “second birth.” The “second” or “new birth” was essential to Wesleyan theology in light of a controversy with the Moravians. The importance of this was illustrated in John Wesley’s sermon, “The Marks of the New Birth” that provides extensive scriptural basis for his view.

The final stanza in most hymnals paraphrases the beautiful biblical citation from Malachi 4:2: “But unto you that fear my name shall the Sun of righteousness arise with healing in his wings” (KJV).

Each Christmas season we are invited by this venerable hymn to join the angels in swelling the cosmic chorus:

With th’angelic host proclaim,
“Christ is born in Bethlehem!”
Refrain: Hark! the herald angels sing,
“Glory to the new-born King!”

Becky and I will be traveling tomorrow so we request that you pray for us that God will give His travelling mercies on us. We will be spending a few days in Branson, Missouri and will be back in town on Wednesday evening.

Love you all and God Bless each of you.